Today is PTSD Awareness Day, and while the term is well-known, it is often misunderstood. 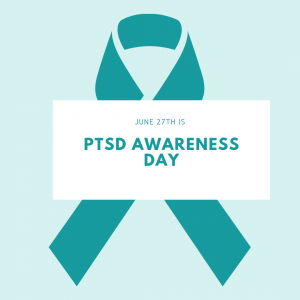 In fact, there are many myths about PTSD that can prevent people from seeking treatment. The most prevalent one? That PTSD only happens to soldiers in war. In fact, any distressing event can trigger it – including having a child or a sibling with a life-changing illness or injury.

Below we debunk this, and other common misconceptions about PTSD and traumatic stress. Read on to see which ones you’ve heard and believed. Then share with your family and friends in honor of today.

Myth: PTSD only happens to veterans

Many people think about soldiers and war when they think about PTSD. However, PTSD can happen to anyone after a traumatic event. Traumatic events include, but are not limited to, natural disasters, serious road accidents, mass violence, sexual assault, and significant health problems.

In fact, up to 80 percent of children and their families report experiencing traumatic stress following pediatric illness, injury, hospitalization or painful medical procedures. This experience is so common it has a specific term – pediatric medical traumatic stress or PMTS.

Myth: You have to be the patient to develop PTSD

Believe it or not, research has shown that parents and siblings are more affected by traumatic stress than the patients themselves within the first two years of a diagnosis. About a third of siblings and fathers have post-traumatic stress symptoms when a child is diagnosed with and treated for cancer. The same is true for about half of mothers. In comparison, childhood cancer survivors experience it at a rate of 20 percent.

And while a sick or injured child — depending on age — is likely to overcome the symptoms of pediatric medical traumatic stress (PMTS), as he or she grows, parents may feel the effects for longer. In a study of children diagnosed with spina bifida, symptoms dropped in the first four years of the child’s life and pretty much went away by the time they were in school. But 30 percent of the mothers and 20 percent of the fathers still suffered from PTSD.

Myth: PTSD shows up right after a traumatic event

PTSD, and recovery, operate on their own timeline. While symptoms of PTSD affect some people in the immediate aftermath, others may not experience symptoms until weeks, months, or years later.

And, these symptoms may last long after an event is over. In up to 20 percent of childhood cancer survivors and 45 percent of their parents and siblings, symptoms persist for years after treatment has ended.

Myth: Everyone experiences PTSD in the same way

PTSD is a body’s reaction to a traumatic event, but everyone experiences it in different ways. Symptoms are both physical and psychological, and can include: nightmares or unwanted memories of the trauma, avoidance of situations that bring back memories of the trauma, difficulty concentrating or sleeping, and heightened reactions, anxiety, or depressed mood.

Everyone has their own personal triggers too. These could include exhaustion or stress, sensory overload, and places, sounds or smells that serve as reminders of the traumatic event. In the case of medical trauma, scans and medical tests are very common triggers. In fact, it’s so common it has its own term – scanxiety.

PTSD is not a sign of emotional weakness – anyone can develop it given certain circumstances. In fact, it is a very normal reaction to abnormal events, outside a person’s control. Yet people often believe that adults should be able to handle their emotions on their own. Reaching out for help, and specifically reaching out for mental health therapy, can bring up feelings of guilt or shame.

In reality, seeking out professional treatment for mental health concerns in no way means a person is weak or has a mental health disorder. In fact, recognizing there is a problem and asking for help is a sign of strength.

From time to time, everyone experiences life events, like the illness or injury of a child, which overload their ability to cope. A therapist can help you understand your emotions, find coping strategies that work for you, and create a self-care plan to help you cope in the future.

Myth: There’s nothing you can do about PTSD

We all experience traumatic events in our lives, but not everyone develops PTSD. Why?

First, everyone has a different threshold for coping. However, what happens after an event is also important. Stress can make PTSD more likely, while social support may make it less so. Research has also shown that effective stress reduction and coping habits can minimize the onset or intensity of PTSD.

Two of the best ways to cope – physical activity and affection. Need more ideas? Here are a few for parents, as well as children.

Also, don’t forget the value of talking with a professional. Even if you have developed PTSD, you can still have a healthy, fulfilling life. A therapist trained in trauma and PTSD can use evidence-based treatments, such as cognitive behavioral therapy (CBT), or possibly medication, to help reframe and cope with the thoughts and emotions causing anxiety, depression, or other PTSD symptoms.

The most important thing to remember is that we are all human, and we all struggle sometimes. The key thing is to give yourself, and others, grace and ask for help when you need it.

We Welcome Your Comments